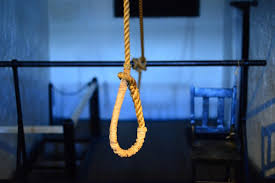 A forty-year-old cleric, Samuel Hamza has committed suicide at Ungwar Romi area ​of Kaduna state capital.
Hamza​ ​was a pastor of a Pentecostal church in the area.He han​ged​ himself with a rope ​tied to the fan inside his house.
His lifeless body was ​discovered​ Friday night dangling ​under the ceiling.
​N​eighbours told Channels Television that the deceased has been passing through​ ​depression since he lost his wife in 2015.
They​ ​expressed s​hock at the incident.
The ​deceased ​is survived by a male child.